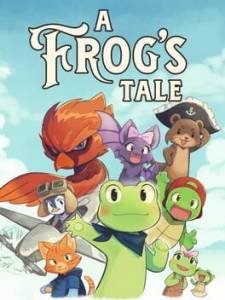 Countdown of remaining time before release date of A Frog's Tale.

A Frog's Tale is a linear story-driven turn-based RPG. As Norman the Frog, the player explores a variety of settings, solving puzzles and battling enemies to advance the story. Levels are designed with verticality and platforming in mind to accommodate the frog's key ability: jumping. The player can also swing the sword while exploring to slice grass, activate switches, stun enemies, and more.

Norman the Frog meets friends on his journey that join his quest and help him along the way. Each party member grants an additional skill to be used while exploring that can aid in solving puzzles and navigating the environment. The party members will also lend their skills during combat in the form of attacks and magic spells.

Battles are not random. Instead, coming into contact with an enemy begins the turn-based combat. Battles utilize a rhythm-based timing mechanic to execute actions in time with the beat of the music. Performing enough successful rhythm attacks will build the RP gauge, allowing the player to combine Norman the Frog’s power with his partner character and execute devastating Dual Techniques, which require the player to input even more involved rhythmic inputs. The battle music is dynamic and will change according to the players selected actions and success performing them.