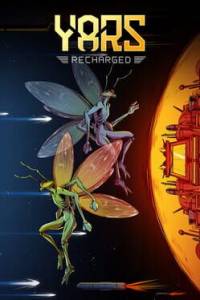 Countdown of remaining time before release date of Yars: Recharged.

Yars: Recharged is the latest title from Adamvision Studios and SneakyBox, the team behind the Atari Recharged series, infusing elements of arcade, shoot-em up, and bullet hell into the classic's formula. Yars: Recharged requires players to remain acutely aware of visual and audio cues that hint of impending danger, and to master rhythm of each boss as they navigate increasingly complex enemy defenses, all to epic soundtrack by Megan McDuffee.