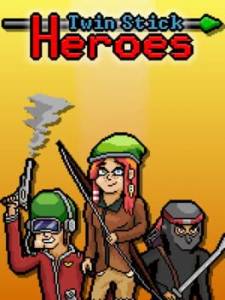 In Twin Stick Heroes you take control of an oddball group of "heroes" duking it out for ultimate glory! Matches are fast and intense, every second can either mean your victory or demise, so you may have to be a little creative to come out on top.

All 19 heroes vastly change gameplay, each and every one is equipped with a unique weapon or ability focusing on a certain playstyle. Sniping players across map with a bow and arrow or going in close with a dart gun can be just as effective as laying traps or hiding in plain sight as Ghost.

Controls are tight and responsive meaning that no matter how slow or fast your HERO is you'll always have a way out of most situations.

The core fighting mechanics are easy enough for any new player, but has enough depth to draw veterans of the twin stick shooter genre, with a huge amount of heroes and items to choose from, as well as a large variety of gameplay altering variants, modes, maps, and settings to play around with.

Many people may describe this game as a multiplayer bullet hell, but with the vast armament and tools given to the player the winner is most likely the one who is the most creative not necessarily the one with the fastest finger.