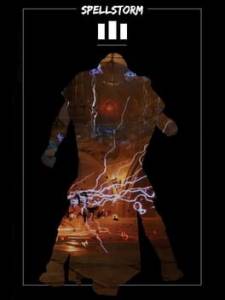 Countdown of remaining time before release date of Spellstorm.

A re-imagining of the classic game Magestorm, fight in an all-magic battle arena as an archon pulled from time and imbued with fantastical powers in an eternal struggle between the 3 Primal Forces - Order, Balance, and Chaos. Fueled by increasingly powerful magic, defeat your foes and their shrines in this three team FPS battle arena.