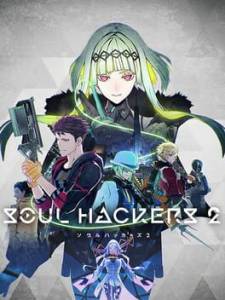 Countdown of remaining time before release date of Soul Hackers 2.

Soul Hackers 2 takes place in the 21st Century and is set during a war between the Yagaratsu and the Phantom Society, two opposing factions of Devil Summoners. The story follows two supernatural "Aion" beings named Ringo and Figue, who descend into the human world from their birthplace in the data stream of information, in order to avert a cataclysmic event that they predict will doom humanity