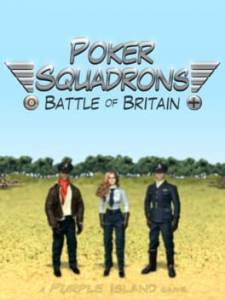 Countdown of remaining time before release date of Poker Squadrons.

Fight the Battle of Britain, four Poker hands at a time!

Poker Squadrons is a single-player card game where you play out the events of the Battle of Britain.

You take control of a British Royal Air Force Fighter Squadron and are pitted against a computer opponent controlling the German Luftwaffe.

Both sides draw cards from a shared 52-card deck to simultaneously assemble 4 poker hands to send into combat.

The shuffled deck and opponent's AI ensure a unique challenge each time you play.

Poker Squadrons brings you back to 1940, when Germany launched Operation Sea Lion, their plan to invade Great Britain. Events from the historic aerial battle are presented in the game's 18 stages, which are played in 4 phases:

2. Secret Cards: Play a secret card increase your chance of victory in combat. NOTE: This phase is not available until stage 3.

3. Form Up: Drag to reorder your assembled poker hands to match up against the incoming poker hands, some of which may contain hidden cards that remain face-down until the combat phase begins.

4. Combat: You must win at least 3 out of the 4 poker hand matchups to clear each stage.