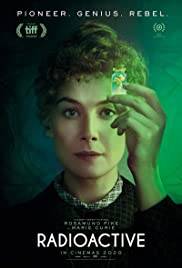 Get the remaining time before film "Radioactive " release in United States.

A story of the scientific and romantic passions of Marie Sklodowska-Curie (Polish scientist) and Pierre Curie, and the reverberation of their discoveries throughout the 20th century.

Writers:
Jack Thorne (screenplay by), Lauren Redniss (based on the book by)